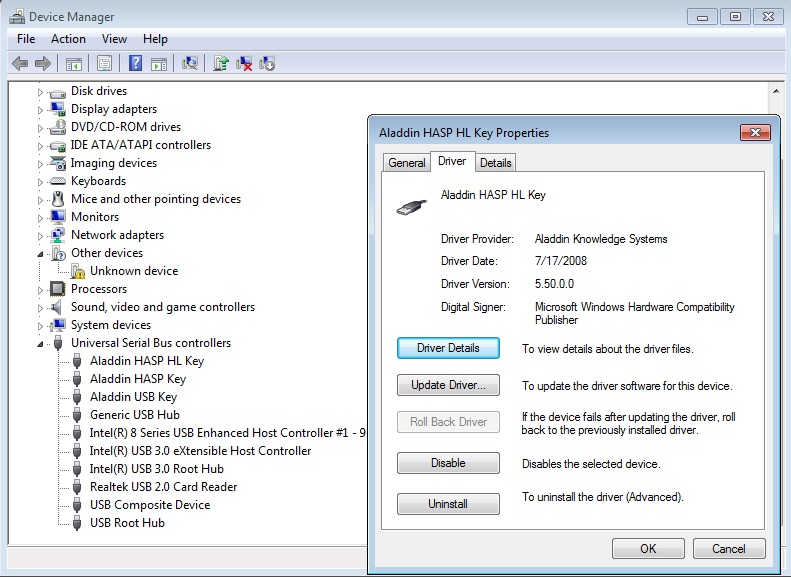 One of the (many) things I absolutely hate is when, during the installation of a program, a ton of other crap is silently installed beside it without any warning or indications.

I just noticed a new service, “hasplms.exe”, running. I have no idea where it came from or what installed it. I did give Lightworks a spin yesterday (not impressed), as well as my lengthy ordeal attempting to install Tomb Raider Anniversary which I complained about in my last post, maybe one of them install it… but I dunno.

With no idea where it came from, and no uninstaller to be found, I turned to the Internet. It didn’t take long to find a YouTube video illustrating the uninstall process, and it was surprisingly pain-free. From hasp.com/srm (which redirects to sentinelcustomer.safenet-inc.com/sentineldownloads/) download the command line run-time installer and run it as

And it looks like the service’s gone, without me having to rage and fume about yet another bit of computer BS. Now I just have to see if anything breaks…

A few comments have prompted me to provide slightly more explicit instructions, with pictures. Anywhere you see my name (Andrew), expect instead to see your name (or whatever the name of the account you are using is).

Open the Downloads folder, or wherever you saved the file to, and right click on the downloaded file. Click on “Extract All…”.

A window will open, asking where you want to extract the files from. Remove the highlighted part.

This is the path we want the downloaded files extracted to. Again, if your name’s not Andrew, that part of the path will be different.

Returning to the window that was showing us the Downloads folder, you’ll see the newly created folder.

Ensure that the “haspdinst” program was properly extracted, if you must.

Now you must open a “Command Prompt”. You can do this in various ways, but for now just use the Start Menu.

Your command prompt window may not look exactly like this; I use it fairly frequently, and so have resized and customized it to suit my uses. Also, be aware that I run Windows with UAC permanently disabled. I don’t know if UAC will interfere with this process. If it does, you’ll have to look in to running the command prompt with elevated privileges.

This next part may look like gibberish, but there’s only three commands that really need to be run (they are underlined in pink in the picture). Obviously, <ENTER> is the enter/return key.

A small window should pop up, asking you to wait. This will uninstall the software.

Hopefully this clears things up a bit.