Find album reviews, stream songs, credits and award information for Run to Ruin - Nina Nastasia on AllMusic - 2003 - For those who came to know each syllable and. Nina Nastasia - Run to Ruin review: 32 minutes that will brand you forever.

For those who came to know each syllable and every note of The Blackened Air, Nina Nastasia's third album will take a little getting used to. Released less than a year after its predecessor, Run to Ruin is a much more skeletal and considerably starker album in comparison - it's also nearly a quarter of an hour shorter in length. Even though the majority of it was recorded in France during the month of June, its lulling tempo, sparse sound, and tangible atmosphere all leave the effect that it was actually made during an extremely hot and humid August afternoon, somewhere south of the Mason-Dixon Line. Again, Nastasia and her guitar are backed by an assortment of drums, basses, pianos, accordions, violins, cellos, and banjos. Many of the musicians here also played on The Blackened Air; the Dirty Three's Jim White provides the drums instead of Jay Bellerose.

While the head count of those involved is great in number, the notes they play are few and crucial. The first four minutes of the 'The Body,' a quiet but lyrically jarring song, consist only of a nearly silent Nastasia and her delicate guitar. Just after she completes her final line, a violent stirring of strings enters that comes closer to matching the nature of the opening verse's lyrics: 'My blood for you, my lover's bruise/My clothes are scattered, my skull is fractured.' The empty spaces and brief running time might make the album seem as if it doesn't contain enough substance to absorb. That's not the case. None of these eight songs sound unfinished in the least, and whatever spaces the arrangements leave enable the imagination to play as much of a role as the instrumentation.

As for the running time, well, you'll just be more likely to play it from start to finish. Andy Kellman. 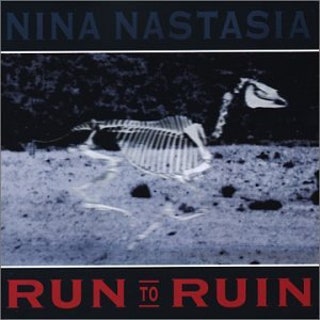 Nina Nastasia hails from New York, and has released four studio albums since 2000. The first, Dogs, was limited to 1000 copies, and so although it sold out quickly, these copies obviously got into the right hands. She was soon signed to Touch & Go for 2001's stunning Blackened Air (my favourite of her records) and 2003's Run To Ruin. Touch & Go re-released Dogs in 2004, after which Nina left the label to sign up with Fat Cat and release last year's excellent On Leaving. So far all of Nina's records have been recorded by Steve Albini, and his influence is telling in the stark, honest arrangements and production. Nina recorded six sessions for Peel, starting with this one in June 2002. I've got three more of the sessions, all of which i'll be putting online in the near future.

Tomorrow: The next part of my Neil Young discography. Until then, enjoy.

Nina Nastasia - 01 Beautiful Day (Peel session) Nina Nastasia - 02 Albert's Song (Peel session) Nina Nastasia - 03 Every Time (Peel session) Nina Nastasia - 04 Untitled (Peel session) Sorry folks, had to take the files down after a request from Nina's partner/bandmember Kennan Gudjonsson, as it seems like they are going to be released some time in the future (Good news!) Check out Nina's for some more songs. 2 Comments: popgun said. Thank you so much for this, Beautiful day is such a great song i can't believe its not on any of her albums (unless its a cover version???), i went to see her in concert recently and was blown away by how great she was, looking forward to more of her sessions. I've been listening to the new album a lot recently. It's a bit more sophisticated musically than Dogs (which I loved) and the air of melancholy is more refined. I'm disappointed to have missed the Peel Sessions, hope we don't have to wait too long for the release.