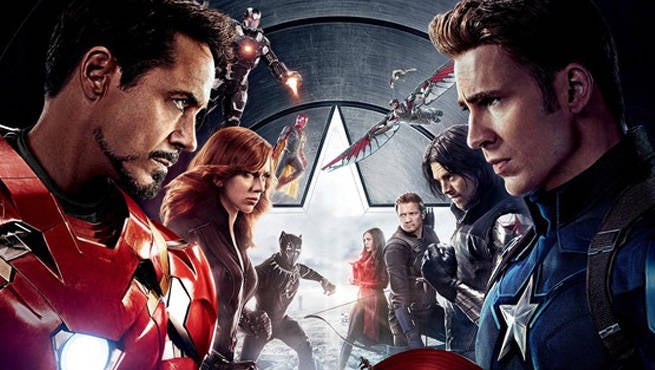 We're 12 movies into the Marvel Cinematic Universe, and the law of diminishing returns tells us the MCU should, by now, be stumbling like a Jason Voorhees victim fleeing through the woods. Ant-Man's problematic production cost them a visionary in Edgar Wright, while Age of Ultron's studio interference pushed pitch-perfect director Joss Whedon to breaking point.

This has all piled the pressure onto what Disney would much rather call Avengers 2.5 (if the lawyers would allow it). Fortunately for the House of Mouse, the MCU has two aces in the hole: the brothers Russo. The directing duo breathed life into what was hitherto the weakest link in the series - the First Avenger himself, Captain America - with their first Marvel gig, The Winter Soldier, which is widely regarded as the MCU's pinnacle thus far. At least, until Civil War breaks out. Like another recent superhero face-off, Civil War uses the mass destruction of the previous instalment to set the stage. After a series of catastrophes dealt with, and even created by, the Avengers, world leaders have had enough, and want to put the heroes on a tight leash. Some agree, some don't.

Nobody is wrong, it's just a difference of opinion. But when a shady villain (Daniel Bruhl) puts the boot in, the heroes are forced to pick a side. And boy are there a lot of heroes. And therein lies the Russo Bros' most impressive achievement.

Rather than get buried under the weight of superhero armour (even the graphic novel on which this is based couldn't handle them all), the Russos manage what Whedon so expertly pulled off in The Avengers - finding breathing space for a cast of larger-than-life characters on the same screen. For all the spectacle, the success is in the story. As Disney perfect the art of the franchise, they're also learning lessons across their pillars, and thanks to the Pixar approach, they're figuring out how to make a story bullet proof. Indeed, Civil War, for all of its fanboy shout-outs, continues The Winter Soldier's sense of mystery and intrigue, using the shady shenanigans to drive action sequences that rarely feel forced. If there is a drawback, it's Marvel's relentless pushing of future movies. Something they have perfected here, as characters are introduced if only to set them up for their own story arcs, of which there are precious few here. Characters don't change in Civil War, they just get calm or angry.

That the insect men (Spider and Ant) manage to steal the show is no mean feat. Especially in a movie in which Paul Bettany is playing himself as a super-powered robot in chinos. It's mostly down to the script's excellent comedic beats, which serves the two chief wise-crackers nicely.

The narrative momentum is sustained right up until the finale which, refreshingly, features no buildings falling over. And while there is a lack of closure, leaving our most familiar characters to deal with the fall-out in 2018's Infinity War, the ride is so much fun that it's an easy issue to forgive.

Phase two might have ended with a whimper, but phase three is no Final Chapter. Rich Phippen Related.

With many people fearing the actions of super heroes, the government decides to push for the Hero Registration Act, a law that limits a hero's actions. This results in a division in The Avengers. Iron Man stands with this Act, claiming that their actions must be kept in check otherwise cities will continue to be destroyed, but Captain America feels that saving the world is daring enough and that they cannot rely on the government to protect the world. This escalates into an all-out war between Team Iron Man (Iron Man, Black Panther, Vision, Black Widow, War Machine, and Spider-Man) and Team Captain America (Captain America, Bucky Barnes, Falcon, Scarlet Witch, Hawkeye, and Ant Man) while a new villain emerges. Captain America Civil War is the thirteenth film of the Marvel Cinematic Universe. It is directed by Anthony and Joe Russo, with a screenplay by Christopher Markus & Stephen McFeely.

In Captain America: Civil War, disagreement over international oversight of the Avengers fractures them into opposing factions - one led by Steve Rogers and the other by Tony Stark. Civil War is definitely one of the best Marvel movies to date, and absolutely on par with The Winter Soldier which was also great.

They are both on top in the Marvel Cinematic Movies ranking of mine so far. The conflict between these well beloved characters is done in a brilliant and fantastic way by the amazing Russo brothers who took the cheese out of the first Captain America movie, made one serious and great second movie, and build upon them both with the third outing.

Everyone does a great job here, Chris Evans has made Captain America his own same as Robert Downey Jr for Iron Man. It features a very big ensemble cast and not one of them is anything less than great on the role. The fight scenes are also some of the best ever made in a comic book movie, even better than in The Winter Soldier. Especially the airport scene is just mesmerizing and totally stands out from everything else that's going on. Spider-Man is also unbelievably well done and Tom Holland is just fantastic. I am one of the few people who actually loved The Amazing Spider Man movies, and really got mad to hear that they are going to reboot the character again but I can see now that it was worth it. The visuals are great from beginning to end, the music is also good as usual.

Hum saath saath hai. The villain is something that most people though it was the weakest point but I strongly disagree with that. He had reasoning as to why he is doing those things, and he pushes the other characters in new directions which is also necessary. I generally adored this movie, and even though I am a DC fan, there's just no denying that Marvel knows what they're doing and that is why they are much more successful right now.