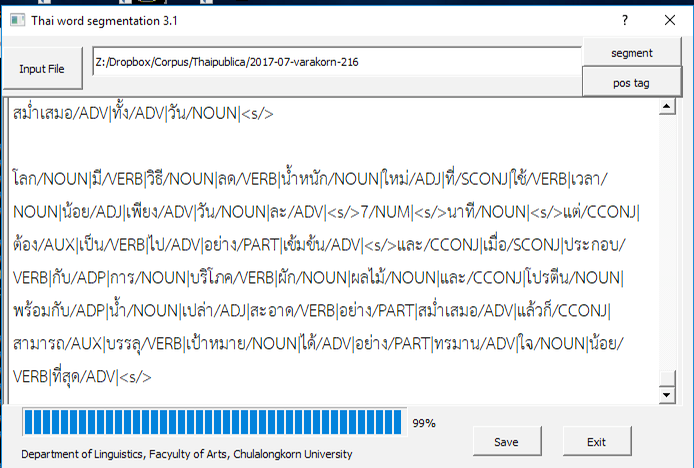 ISO 11940 is an ISO standard for the transliteration of Thai characters, published in 1998 and updated in September 2003 and confirmed in 2008. An extension to this standard named ISO 11940-2 defines a simplified transcription based on it.

Only three consonants have the horn in their transliteration, ฅ kho khon, ฒ tho phuthao and ษ so ruesi, and only one consonant has an underline, ฑ tho nang montho.

The letter å is the only precomposed character specified in the output of transliteration.

Lakkhangyao (ๅ) has been shown only in combination with the vowel letters ฤ and ฦ. The standard simply lists ฤ and ฦ with the consonants and lakkhangyao with the vowels. An isolated lakkhangyao would also be transliterated by a small letter 'i' with stroke (ɨ), but such should not occur in Thai, Pāli, or Sanskrit.

The transliterations of ว wo waen and อ o ang have been included here because of their use as complete vowel symbols, but their transliteration does not depend on how they are being used and the standard simply lists them with the consonants.

Compound vowel symbols are transliterated in accordance with their constituents.

Note that yamakkan (–๎) is represented by a spacing tilde, not a superscript tilde.

In general characters are transliterated from left to right and, where characters have the same horizontal position, from top to bottom. The vertical sequencing is in fact simply specified as tone marks and thanthakhat (–์) preceding any other marks above or below the consonant. The standard denies at the end of Section 4.2 that the combination of sara u (◌ุ, ◌ู) and nikkhahit (◌ํ) can occur and then gives an example of it when specifying the transliteration of nikkhahit, but does not show the transliteration of the combination. The effect of these rules is that, except for nikkhahit, all the non-vowel marks attached to a consonant in Thai are attached to the consonant in the Roman transliteration.

The standard concedes that attempting to transpose preposed vowels and consonants may be comforting to those used to the Roman alphabet, but recommends that preposed vowels not be transposed.

For example, ภาษาไทย (RTGS: Phasa Thai) should be transliterated to p̣hās̛̄āịthy and เชียงใหม่ (RTGS: Chiang Mai) to echīyngıh̄m̀.

The standard specifies the order in which the accents should be typed, but not all input systems will record accents in the order in which they are typed. Unicode specifies two normalised forms for letters with multiple accents, and transliterated text is highly likely to be stored in one of these forms. This complicates automatic back-transliteration. As Unicode-compliant processes must handle such variations correctly, the transliterations on this page have been chosen for ease of display – present day rendering systems may display equivalent forms differently.

Many fonts display novel combinations of consonants and accents badly. For example, the Institute of the Estonian Language publishes an explanation of the application of the standard to Thai on the web, and with one exception this seems to be a comply with the standard. The exception is that, except for the macron, accents over consonants are actually offset to the right, giving the impression that they have been entered as the corresponding non-combining characters. The standard specifies the transliterations in code points, but someone working from this free explanation could easily deduce that the spacing forms of the tone accents should be used.

The character sequencing of the ICU implementation is different. It transposes preposed vowels with the following consonant, and processes the marks on a consonant in the order in which they are stored in memory. (Most Thai input methods ensure that the marks are stored in bottom to top order.) It does not transpose preposed vowels with complete consonant clusters; consonant clusters cannot be identified with complete accuracy, and transposing vowels with clusters would require an additional symbol to permit reliable conversion back to the Thai script.

For example, under this implementation ภาษาไทย transliterates to p̣hās̄ʹāthịy and เชียงใหม่ to cheīyngh̄ım̀.

New in this version:. Bulk lookups: Paste a whole chunk of text in the Dictionary search field and see definitions for the individual words. Dynamic Type: The app now adheres to the system-wide font size specified in the iOS Settings under General Accessibility Larger Text. Fresh dictionary material from the thai-language.com editor-in-chief. Did you know?

Previous search terms, if any, are now automatically selected when the search screen appears. No need to delete or clear the previous search, simply start typing. Be heard:. You can now provide feedback to the app author directly from the About screen in the Settings tab. You can now send a dictionary entry to others by e-mail, text message or social media. This includes links to view the definition online, in the app and links to install the app. Text-to-speech speed for both English and Thai is now configurable from the Settings screen.

Problems fixed:. Fixed a problem would prevent the 'Copy/Speak'-context menu from appearing on the first long press. Fixed a problem where the search bar would be messed-up upon returning from the landscape ('LARGE TYPE') screen. Tint color in tab bar on iOS 7.1 corrected. Background color in search bar corrected. Highlighted terms made bold for legibility.